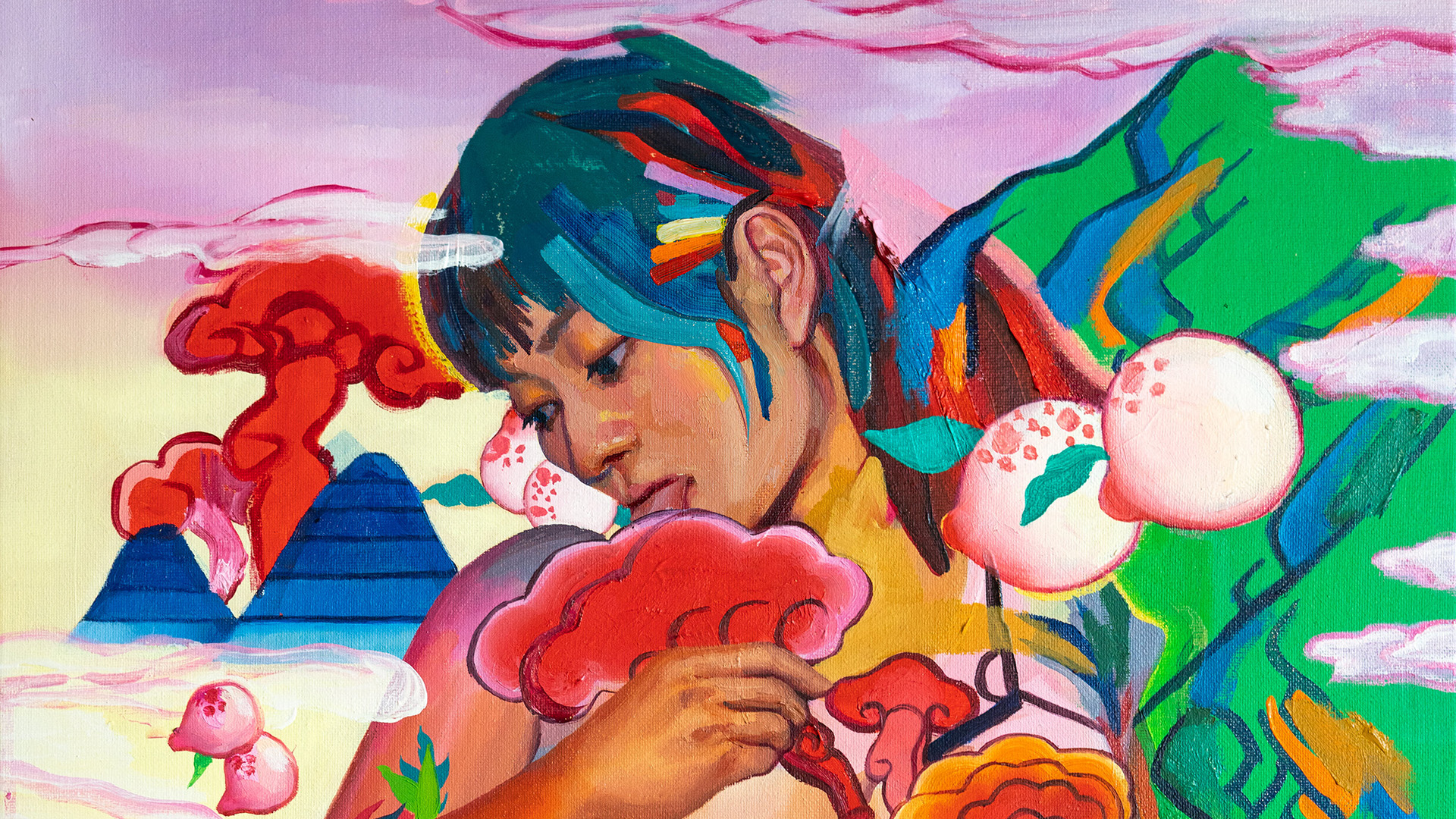 The World is experiencing a moment of stand-still during the events of Covid-19 pandemic. Surely it is affecting each one of us in many different ways. To some this means fear and uncertainty about the future, economic difficulties, to others – inspiration and time to create. This period brings ideas into surface, raises questions and debates about our healthcare and economic systems, ecological, political and social issues.

This is a series of posts featuring creative expressions made during Covid-19 pandemic, or previous works that are particularly relevant during these times of change.

My version’s first panel features a creature at the base of the stairs, at the beginning of his journey with hands and paws reaching out of the mountains crevices lending a helping hand up. The mountain is referenced from Korean folk paintings and the creature is an omniscient mythological beast which secretly represents me.

2nd panel is what the creature finds over the dark mountain: An oasis of mythological creatures with humans as well, some paired up, some still searching. Whether it’s lovers, friends, family, they have found each other through this journey. Creating and harnessing love.

Final panel is a god like figure represented by a lion with the main character (now with a lover) in this heaven. People theorize that Bosch included a lot of symbols which represented not only his fear but the rest of the world at that time, such as one theory goes of this amputated foot symbolizing the disease ‘St. Anthony’s Fire’ which was gangrene caused by eating black mouldy bread, which was later used in the fifties to create LSD so in Bosch’s time, your limbs would fall off while you were tripping crazy balls to put it lightly. Rather than representing fear, I want to paint the positive version about our world in my painting such as the progress we’ve made being accepting of LGBT love, interracial love, space advances and what it means to find healing from fear. My version also includes the Taoist theme of all ten symbols of long life which was represented in old Korean literati or ‘classical’ paintings: Sun, clouds, water, rocks, Deer, Cranes, Tortoises, pines, bamboo and Sacred Fungus (which when eaten gives you eternal youth).

So how did I choose to paint this? Going back to tripping crazy balls.

I had an experience with DMT (otherwise known as the spirit molecule, a hallucinogenic tryptamine drug that you can find naturally occurring in many plants and animals, and is said to be released in our bodies right before dying, which is where the whole ‘life flashing before your eyes’ phenomenon comes from. My experience has allowed me to be a witness to what I Already believed about humans and this universe. So I met god. Not the Christian god, not a physical being at all actually, but the presence of his overarching love filled my entire body and heart and he basically took me by the hand and said let me show you what this world is really like. I went through a fast paced montage of the earth coming into creation from space, dinosaurs roaming and dying, fish forms becoming tadpoles walking onto land becoming chimpanzees becoming humans and then I got shot into space and there I was in this vast darkness, but with this overwhelming sense of unconditional love and welcome I was looking back down at everyone on our earth. I witnessed what I already knew, we were all from the universe, made of the same star dust. I’m not exactly religious but I do believe in the power of religion and art and metaphors. Love alone might not solve everything, but it ultimately makes us keep moving forward, progressing, creating and evolving and we are one with everything. It is an important key in keeping the balance in this sometimes chaotic and scary world.”
Lauren Hana Chai

Ideas Block turns 6! For that occasion we are gath

Next week we will have jam sessions every day: 6-1

Join and enjoy ceramics every Wednesday! For mor

This Friday, 20th of January, join us in Kompresor

We are starting kids aerial classes, every Tuesday

This Saturday we'll be working along with bacteria

Tonight we have music inspired by jazz, rock, nois

When this happens, it's usually because the owner only shared it with a small group of people, changed who can see it or it's been deleted.
View on Facebook
· Share